One in three Australian women will be in a battle for their life against an ex or current intimate partner during their lifetime.  It becomes a fatal battle when the woman is strangled or smothered (because, can you believe it, they are trying to shut us up????) or when they are bludgeoned to death.  This is the common way for a woman to die at the the hands of someone that was, once or currently, claiming to love them.

Australian women die when they try to use their voice. 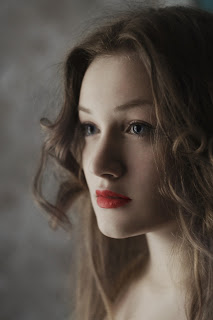 We are all guilty of being at a party and watching a violent argument without stepping in.  Listening to a neighbour being berated and threatened but we decide not to call police.  Because we have all been conditioned by that little Australian voice that says, "it's none of your business... stay out of it.... they are just drunk...".

Our conditioning starts in the classroom.  From the earliest age little girls are repeatedly praised and rewarded for being quiet, conscientious, listening, participating...  Little boys are expected to be loud, rambunctious, active.   When a boys academic ability naturally kicks in, they receive the academic accolades, and the girls are left with the residual messages of, "you have to be quiet, conscientious, and listen more if you want to receive recognition of this stature again".  And so the conditioning is ingrained.  It is further ingrained when we look at the traditional sports and recreational differences between girls and boys - girls dance and perform, are graded on perfectly slicked hair buns, silence, weight management and demure outward presence and a pleasant smile.  The gentleman run, kick, shout commands, tackle, grunt, throw, defend.  Their voice is a mark of their strength.  Their leadership.

Women are taught to make themselves as small as possible... make yourself smaller on that bus seat, lose weight, cross your legs, don't lose your temper.  Don't let your daughters get under anyone's feet.

If I had a penny for every woman who said, "I would like to train with weights, but I don't want to be bulky" I would retire.  Because God knows, you don't want to be physically dominate, do you?  That would be too much for the world to bare.


Australians left an indelible mark on the world stage by being the first country, in the world, to be more fixated on the colour of their first female Prime Minister's pubic hair, then her intellectual and political contributions.

And I witnessed educated women joining in on that conversation.  I saw the pleasure and venom with which they jeered at her.  Like returning to a 1980's school yard and dragging new girl off the popularity perch, so the boys won't take their attention away from the resident preening cool girls.

I will say no more on that.

No matter your political background, nothing screams 'insecure' and 'bigoted' more than people using name calling rather than rational intellectual and political argument.

Which I think our education system fails poorly in cultivating.  Who here has done courses on argument, reasoning and critical thinking????  Right.  Que crickets here.  Teaching people to think for themselves.... mmmmmm..... I wonder what would change if that was the basis of our school curriculum?

But name calling.  Australians are gold medalist in that.

But it is not my intent to bemoan and gesticulate.

My intent is this:
Before we as women silence other women with glances, behind hand whispers and social exclusion... could we perhaps teach our daughters there is another way? To teach them that we are all connected,  and when united we cannot be hurt.  That we will not give away our power by allowing others to hurt us.

Could we re-learn to use our voices?
Could we question our use of 'outdoor voices' and 'indoor voices' with our children, before social conditioning means that they have forgotten how to use their voice, when they need it the most?

Could we eradicate shame and guilt, and make these statement sentences a tool on a young girls tool belt that she brings her no embarrassment, only boundaries?  Sentences like:

It is not enough to stop the hands that beat us down.  We as woman must stop with our own judgement, reach out and lift up the voices of ALL woman.

When I teach you and your daughters, that is the place I want to open and ignite.  And then I watch it catch like wildfire as social conditioning is questioned, and connections and protections are cultivated.

Be that torch - you are that torch.  Don't silence women.  Give them a safe place to use their voice, and teach them the difference between words of fear, and words of truth.  This is how we shine light into the violent world of darkness.